Open Source Summit NA 2022 was hosted in Austin, Texas. On Thursday, June 23, Matt gave the keynote. You can watch it above or on YouTube.

In his talk, Matt begins with our favorite furry friend, Slats the cat. Slats is a picky eater, always changing her mind about what she wants to eat. In the game Finicky Whiskers, you must feed slats as much as you can by clicking on the food of her choice. But act fast, because this persnickety pet will prefer something new every few seconds.

Matt uses Finicky Whiskers to explain a new way to think about microservice development. Instead of building each microservice as a stand-alone web server, why not bring the best of the serverless model as an API for developing microservices? Rethinking microservices in this way helps developers stay focused on their preferred tasks while freeing up devops teams to remain operationally focused. In this model, developers are not responsible for solving day-2 operations issues.

The Launch of Fermyon, the Platform for WebAssembly Microservices

If you stopped by the Fermyon booth, you’ll remember that we described Fermyon as “the Cloud Application Platform for Microservices and Web Applications in WebAssembly.” On June 21, we released an installer for Fermyon.

Fermyon is a full Cloud Application Platform. Running on a Nomad cluster, Fermyon provides a dashboard, release management, and application configuration for your Spin apps. How easy is it to build and depoy a Spin app onto Fermyon? With three commands, spin new, spin build and spin deploy, you can create and test an application. Check out our Fermyon platform blog post to read more.

Finicky Whiskers at the Fermyon Booth

Slats the Cat was the star of the Fermyon booth. With dual iPads, we invited guests to compete head-to-head. Anyone who fed slats more than 100 morsels won a Finicky Whiskers t-shirt. During the Wednesday evening booth crawl, one attendee set the conference high score of 208. 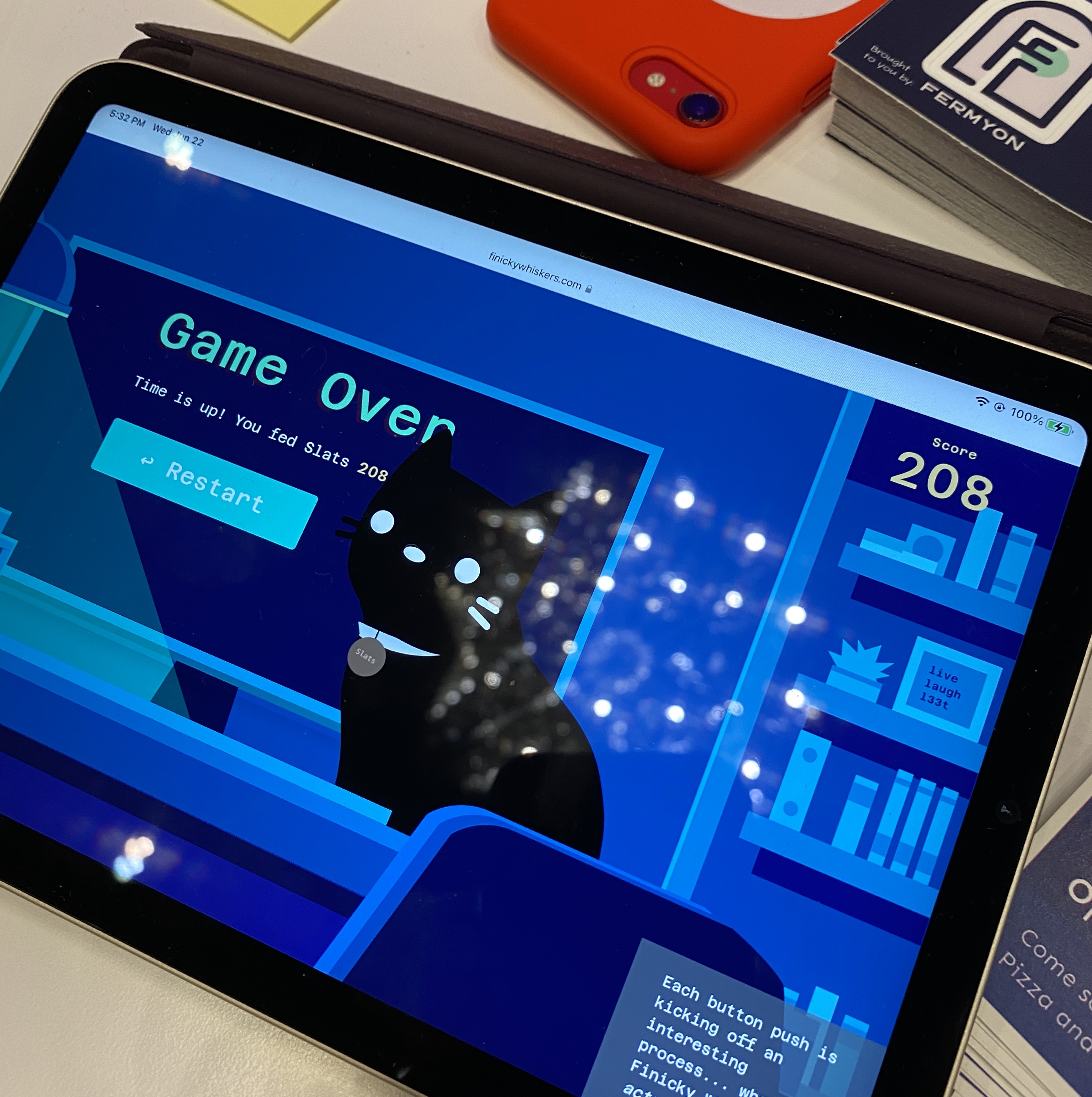 We gave out hundreds of t-shirts. (If you missed your chance, swing by our booth at KubeCon NA in Detroit. We’ll have more!)

Fermyon also hosted an invite-only pizza night nearby. There we had some pizza, chatted, and played games, including Profian’s Cryptle game. It was great to spend time with the WebAssembly community in Austin.

Finally, The NewStack filmed an episode of their On The Road podcast at the Fermyon booth. Matt Butcher chatted with Heather about the promise of WebAssembly in the cloud.

During the conference, TechCrunch posted an article about Fermyon, featuring our goals and our company values.