At this year’s HashiConf, we talked Finicky Whiskers, Nomad, and Spin. Our friends at HashiCorp also put together a MineCraft version of Finicky Whiskers, adding a fun new front end onto the world’s most adorable manual load generator. On June 20-22, HasiConf EU 2022 took place both virtually and in Amsterdam. Fermyon participated virtually. Several of us got up in the pre-dawn hours in the central US and had a coffee-fueled watch party. On Tuesday, Fermyon’s Matt Butcher gave a talk on the virtual track entitled “WebAssembly and Nomad for Next Wave Microservices.” You can watch the entire session here or on YouTube.

Matt’s talk began with a game of Finicky Whiskers, the game in a which you must quickly feed a picky cat whose tastes are always changing. Finicky Whiskers is more than just a cute game, though. It is an example of how WebAssembly microservices can be combined with Docker containers to construct a high-performance scale to zero application.

In this talk, Matt focused on how we run Finicky Whiskers on a Nomad cluster. The cluster, which runs on AWS, has only three Nomad worker nodes, each running on small VM instances. Yet even under production load, the virtual machines hosting our game don’t break a sweat.

Many of us at Fermyon built Krustlet, a project for running WebAssembly inside of Kubernetes. We wrote hundreds of thousands of lines of code during this project. But ultimately, we felt that Kubernetes is a container specific technology. To realize the potential of WebAssembly, we needed to try something other than Kubernetes.

When we tried out Nomad, a brilliantly flexible orchestration system, we were pleasantly surprised to find that we could accomplish the same goal we had with Krustlet with no more than a simple shell script and the Nomad exec driver.

Beyond that, Nomad’s lean runtime means that we can use only a fraction of the compute resources to run our production setup. And we can even use terraform to automate the installation.

In Matt’s talk, he delves into the design philosophy behind the game and talks about the practical aspects of running it. Finally, he shows some of the experimental work we’re doing to build a Nomad driver for the Spin WebAssembly Framework.

Folks at HashiCorp took Finicky Whiskers in a new direction. Erik Veld famously uses Minecraft to illustrate Nomad. For HashiConf, Erik took the Finicky Whiskers microservices and wrote a new frontend that made the game playable inside of Minecraft. 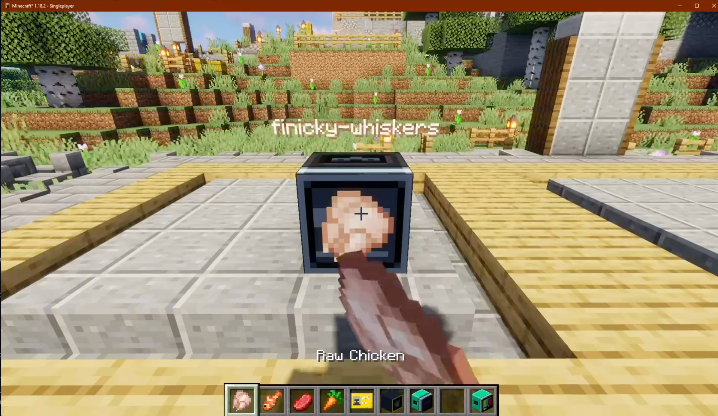 HashiConf EU’s Minecraft world provided a variety of ways for attendees to experience HashiCorp products in a new way, and we were pleased that Finicky Whiskers got in on the action.

Nomad is continuing to evolve. We at Fermyon are excited about the new features rolling out in Nomad 1.4 and beyond. Keep an eye out as we update our platform to take advantage of these new features.